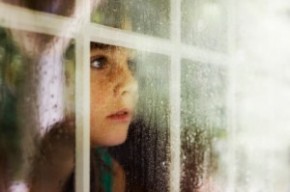 It had been raining all day, and though the rain had passed, the boy was not allowed to play outside. his grandma had told him  he was too frail  to go out due to his asthmatic condition and the damp air would only aggravate him more.

He sat staring through the window, wishing he was out there playing, but most of all he wanted to be around “her”, The neighbor from across the street: a young girl, same age of the boy, and a classmate. He has seen her all his short life but never had the courage to approach her.

she was delightful and beautiful, with dark flowing hair, big brown eyes and a vivacious  smile, and on random occasions during recess she had caught him looking at her, and even though she smiled at him, he hastily looked away and ran out feeling nervous and  shy, often regretting the action he had taken, and wishing he had smiled back instead.

On that day and since the rain had passed, she was playing in her front yard jumping and splashing poodles with great  enthusiasm and laughing loudly at her own amusement .

As he stares at the girl the boy twiddle with his fingers and wonders what it would be to kiss her and hold her, he gets an unusual feeling in his stomach, almost the one he had felt when he was about to open his presents on Christmas day, but there was something else, a feeling of longing a feeling he did not understand, but it would always manifest when she smiled.

As the girl played in the street the boy continued to stare, and lost in his thoughts of her, he did not realize that she had noticed him.

She approached the window, and a sudden wave of anxiousness rushed over him, and hid down under the window, but this time he decided to have courage and face her “what’s the worse that could happen” he thought, so he slowly looked up, and to his surprise she was right there waiting for him, in front of his window smiling back at  him, so he waved and nervously smiled, saying “hi ya”, she then answered “hi i am Gwen, what’s your name?” In which the boy responded “Peter”…do you want to be my friend?